MEYER LAW is an award-winning, woman-owned law firm that specializes in helping technology companies from startups to large corporations with corporate, contracts, employment, intellectual property, fundraising and privacy matters. The team at Meyer Law has helped hundreds of companies from startups that have been featured on Shark Tank to fast-growing companies on the Inc.500 to some of the largest companies in the world, and mentored thousands of technology companies at incubators and accelerators across the United States such as 1871, WeWork Labs and Techstars. Meyer Law has received several awards, including most recently being recognized for the second year in a row by LawFirm 500 as one of the fastest growing law firms in the United States! Learn more at www.MeetMeyerLaw.com and follow Meyer Law’s story on Instagram @loveyourlawyer. 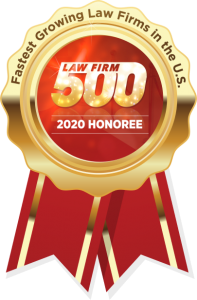 Law Firm 500 is awarded to the Fastest Growing Law Firms in the US. For more information visit https://lawfirm500.com